One in the Pink Makes a Stink 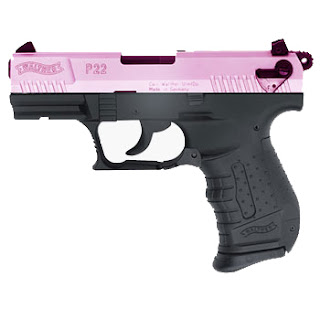 Take a look at the object depicted above.

Go ahead, take a long smouldering gawk at it.

It's a Walther P-22 semiautomatic pistol.

With a pink slide (that's the bit that holds the barrel, and goes back and forth when you pull the trigger).

But it's the pink I want to talk about. Specifically, the reason Walther allowed the slide on the P-22 to be colored pink.

Walther decided to be one of the corporate sponsors of the Susan G. Komen Foundation, a charity dedicated to fighting breast cancer in women.

Now, I have a bit of ambivalence about attacking a breast cancer charity. My sister-in-law passed away two years ago after a long and bloody struggle with the disease, and the SGK Foundation helped out.

But there's a reason to rant now, as the SGK has put its collective charitable foot in it, big time.

Let's follow a few dots and see where they lead, shall we?

First, SGK appoints a new executive vice president, a woman who had earlier run unsuccessfully for office in Georgia on a brutally anti-choice platform. How anti-choice? She was endorsed by Sarah Palin, that's how anti-choice.

Second, there is a change in the Foundation's bylaws to deny grants to any organization under investigation. A board member admitted that the change was solely to target one organization.

Third, enter US Representative Cliff Stearns of Flori-duh, who obligingly starts an investigation.

Fourth - hey, presto! SGK cuts off its grant funding to the organization.

What organization, I hear you ask? Planned Parenthood, the successor to ACORN as Number One on the GOP/US Taliban Alliance's shit list. You see, they don't like Planned Parenthood because it (gasp!) provides abortions, it (gasp!) provides birth control, and (gasp!) it helps poor women get breast exams that could spot cancerous growths early and help them get treatment.

So SGK shuts down about $700,000 in funding to Planned Parenthood. The dots are simple to follow, eh?

Despite the angry denials by the founder and CEO of SGK, it's too easy to see the linkage between the Foundation and the efforts by the Right to shove women back into the Dark Ages. There's a lot of yelling going on, as donors start pulling money away from SGK and sending it directly to Planned Parenthood

The Foundation issued an apology, but still isn't going to give grant money to Planned Parenthood because "it's under investigation."

Which, again, is perfectly logical.
Posted by Walt at 3:16 PM