Bringing Things to A Boil 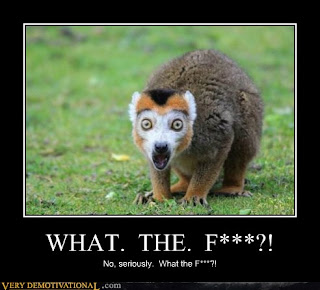 The Idiot Goes Back to His Village; The Pig Finally Finds An Acorn; Hard Times for Journalism

Weep for the 2012 Republican Presidential Campaign.

Rick Perry has withdrawn from the race. A bit of a shame, really, as he was great comic relief. He didn't have a clue and didn't have a whelk's chance in a supernova of actually winning anything. His surge in the polls leading up to Iowa is easily explained when you realize that Perry was exactly what I said he was - a village idiot.

And he endorsed Newt Gingrich. not precisely what Newt may have wanted to hear, because now he's got this idiot hanging around his neck like an albatross.

Let him go back to Texas. Texas deserves him.

***
Last night the remaining Dwarfs showed up in South Carolina for yet another in an interminably long line of debates. Thank Hastur the swimsuit competition is over.

CNN and John King moderated it, and right out the gate King asked Gingrich about his second wife's interview with ABC, in which the lady alleged The Newt wanted an open marriage so he could adulterate at will.

The look that came over Gingrich's face was part fury and part pure, unadulterated joy.

To quote what Huxley purportedly said at the Oxford Debate, "The Lord hath delivered him into mine hands!" He immediately jumped down King's throat and brought the audience to its feet, cheering as the pig excoriated the "liberal media."

To remind the folks playing along at home, the "liberal media" is only as liberal as the conservative corporations that own them allow them to be. Recall Keith Olbermann and his conflict with MSNBC (owned by General Electric).

But the crowd loved it, and after that the debate was Newt's to lose. According to Mark Halperin (looking a bit wiggy), Newt won the debate. The latest PPP poll indicates that Gingrich may actually win in South Carolina.

Mitt Romney was found to have certain weaknesses now, and one hopes that Obama's opposition research guys are taking notes. The Well-Coiffed Two-by-Four looked off-balance.

Which means the deal will go down in Florida, whose GOP delegate count is greater than Iowa, New Hampshire and South Carolina combined. Florida is the neutron bomb of primaries, causing candidates to vaporize or bleed in odd places.

It's a truism that every pig finds an acorn at least once. And Newton Gingrich may have found one. We need to wait and see how the voting goes in South Carolina.

A sad and sorry illustration of just how low CNN has fallen since it first scored big.

It was jokingly and woundingly named the 'Chicken Noodle Network' when it started out. I've called it the Cocksucker News Network at times, because they have started shamelessly pandering and generally lowering their standards in an effort to seize Fox's ratings. To that end, they've introduced all sorts of lights, bells and whistles to attract the Lowest Common Denominator (which is Fox's key demographic).

John, you need to hide your head in shame. Debates cover issues; you should have simply dove at Newt and demanded specifics. Asking him an out of the gate question about his serial monogamy enabled Gingrich to control the debate from then on.

You made it easy for The Degenerate Pig, John King.