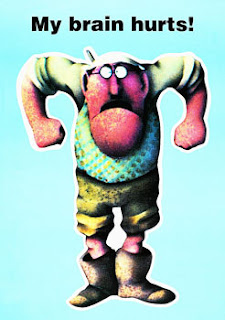 ... to see when Mitt Romney finally gets fed up with Rick Perry and draws the straight razor I know he's hiding in his sock.

Yes, I believe that the Mormon former Governor of Massachusetts is capable of cutting a bitch, especially an uncouth blowhard like Rick "I Balance My State Budget using Federal Money" Perry. Based on his expression during the "True Housewives of Beverly Hills"-style circle jerk that passed for a debate last night, it won't be too much longer.

Now, what else did I take away from that gabfest?

1. Herman Cain has literally no idea what he's talking about. He started using an apples and oranges analogy when describing his Inverse Number of the Beast Tax Plan, but he can't dodge the simple fact that not only will you and I be paying his taxes (which, he concedes, may rise) but also the state and local imposts (which can also rise).

2. Michele Bachmann's getting even farther into The Crazy.

3. Rick Santorum and Newt Gingrich should not have been up there on that stage.

4. Ron Paul stepped over the line by bringing up Ronald Reagan's actual record, and not parroting the sugar coated and well-glossed-over standard GOP boilerplate about Saint Ronnie. What caused the pin-drop silence in the room was an airing of Cain's earlier comments in which he stated that he would consider negotiating a swap with al Qaeda in order to free an American soldier taken hostage (as Israel did with Hamas to free Gilad Sharit). Score one for Paul, although his stands on almost everything else shows that he'll never make President.

5. The final thing I took away from this sorry spectacle is that it desperately needed topless chorus girls to distract the audience away from these rubes.

I look forward to the first GOP primaries - which, based on their current internecine strife, will probably start next month.
Posted by Walt at 7:52 AM