GEOMAGNETIC ACTIVITY CONTINUES: Earth's magnetic field is still reverberating from the impact of a CME on Sept. 9th with intermittant geomagnetic storms in progress around both poles. High-latitude sky watchers should remain alert for auroras mingling with the light of the waxing full Moon. Aurora alerts: text, voice.

On Sept. 9th and 10th, Northern Lights were spotted in the United States as far south as Washington, Wisconsin, Vermont, Montana, Maine, Minnesota and North Dakota. In Michigan, it was like a day at the beach: 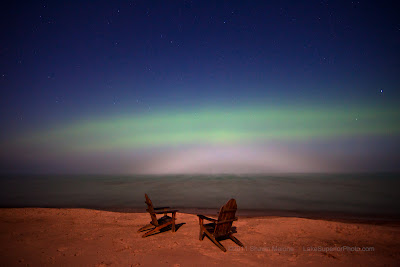 Shawn Malone took the picture from the shores of Lake Superior near the city of Marquete.

Aurora appeared right after dusk, barely visible because of the moon. Gradually the fog moved in, creating a surreal landscape- the aurora and a fogbow!
5d/1600/2.8/5 sec exp/2.8