Thoughts on the death of OBL

I'm not sure why I am not rejoicing. Maybe I've just grown so cynical in the past 10 years. The first thing I thought of when I heard the news that bin Laden is dead was if Obama would stop drone bombing in Pakistan. When did I turn into such a wuss liberal? Shortly after 9/11, I would have been leading the parade the celebrate bin Laden's murder even if cost many more innocent lives.

The New York local news has been focused on the big hole in NYC that is "ground zero" because hundreds of folks have gathered there since last night celebrating the death of bin Laden. Well, I suppose it's nice to see New Yorkers being happy about something (we're the MOST unhappy state in the union) ... but then again, only hundreds of New Yorkers gathered and there are several million of us... so it's not a very large percentage, is it? 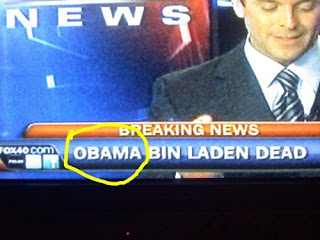 Another fox channel had the newscaster say, "President Obama is dead." Sheesh. Shut up!

Does anyone think this story is strange? Official: Bin Laden buried at sea

After bin Laden was killed in a raid by U.S. forces in Pakistan, senior administration officials said the body would be handled according to Islamic practice and tradition. That practice calls for the body to be buried within 24 hours, the official said. Finding a country willing to accept the remains of the world's most wanted terrorist would have been difficult, the official said. So the U.S. decided to bury him at sea.

Wow. I'm still digesting this. Will Trump demand to see the long form death certificate? Or better yet, the body?

What are you all thinking?
Posted by Liz Blondsense at 7:47 AM