Memories, pressed between the pages of my mind...


Liz and Jersey...and anyone else,

We were looking through some old boxes and found an old roll of 35 mm slide film - undeveloped - for 47 years! Scribed on the metal case was 'nywf64.'
I wasn't sure it could be processed but a good friend has a dark room and all the necessary stuff so he suggested we try it.
17 of the slides came out. They aren't in the best shape but after scanning them, I'm in the process of cleaning them up but I thought some of you "old folks" that live in the New York area and who might have been there, well, this just might jog some memories.
I was fortunate enough to have visited the fair 3 times. I've been to a couple since and New York's was by far the best, at least in my opinion.

By the way, that was my first experience riding the subway - very interesting. The one thing I got a great kick out of was getting off the car and seeing, written on the wall, "Frodo Lives!"
The people I was with had no idea what it meant until I told them. I had just read the books and simply stood there in rapt amazement. Of course there was a host of other scribblings to read and most of them were rather entertaining.
A year later, Simon and Garfunkle released "The Sound of Silence" and many of the passages came back vividly.
Hope you enjoy the pictures. 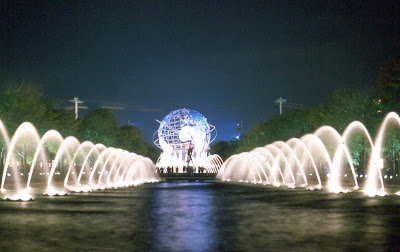 Jersey and Wonkadelica,
Update: Here's a picture of the Sky Ride someone else took. It was like a cable car ride in Europe or Tram. These are the towers you see in the back of my picture. If you click on my picture and enlarge it you can see the "blurs" along the cables. Those are the cars moving during the time exposure. 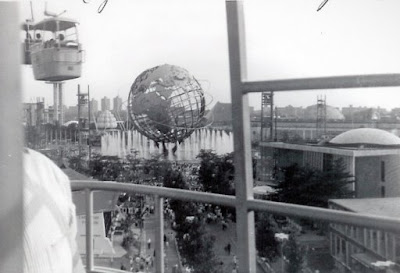