"TRUE BLUE: Why we must replace O with a D" 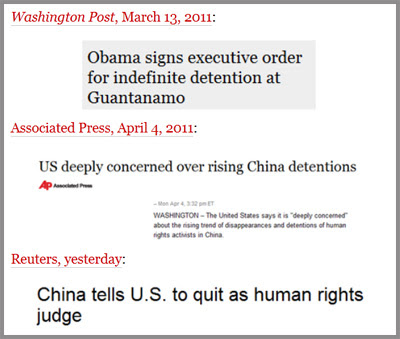 Glenn Greenwald -- who may be the best political writer we have right now -- has put together a series of headlines which demonstrates why the Democratic party must unhitch itself from the Obama wagon. I reproduce the image to the left.

At the end of last year, this blog devoted some space to the idea of re-creating the "New Deal" movement. A real life upheaval forced me to put that project on hold -- temporarily. I would like to get back to it.

But we've run into a problem of nomenclature. The Roosevelt Institute has a newly-prominent site called New Deal 2.0, which does excellent work. I do not want any hint of competition with those folks. Alas, they won't get down to the business of creating an actual movement.

They complain about Obama, but they do not push for his replacement. Their attitude seems to be: "If a challenger shows up, maybe we'll support him."

That's not good enough. We must scream for a challenger to show up. We must make it happen.

And no-one else seems to be doing that. We need a genuine grass-roots uprising -- Wisconsin gone national. If someone else starts such an enterprise, I'll join. Until then, I'm going to try to push on forward with a drive to revive the spirit of FDR.

So...please share any ideas you have regarding a new name for this initiative. We need something short, catchy, and redolent of the Democratic party's best years.

Incidentally, this issue marks the place where I part company from our friends at Corrente. Those guys remain mired in the romance of a third party. Even if such a party existed, any attempt to run a progressive third party candidate would be a fiasco akin to the 1948 run by Henry Wallace. (Wallace received 2% of the popular vote.)

No, we must burrow within. We must retake an existing party with a proud past -- and a not-so-proud present.

The most spectacular political achievement of our lifetime was the takeover of the Republican party by its libertarian or neo-liberal wing -- a takeover which began pretty much the day after Nixon declared "We're all Keynesians now." Give the Randroids credit: By eschewing the third party route (yes, I know that a Libertarian party exists -- and I wish it well!), by doing the patient, long-term work of infiltrating and commandeering the Republican infrastructure, they have succeeded in their project of radicalizing the nation.

Naturally, when faced with such a success story, many liberals and progressives will use all of their intellectual powers to come up with reasons not to emulate a strategy with a proven track record. That's the way too many liberals think. They love to come up with clever new reasons to fail.

What lesson do we draw from this? Which battle plan do we emulate?

If you count yourself as "too liberal for Obama," you must ask yourself a hard question: Do you simply want to carp and complain from the sidelines? Or do you want to see your ideological colleagues rise to a position where they can wield actual power and get things done?

Most progressives seem to feel comfortable only as carpers and complainers. That's why they traditionally counsel us to "Think globally and act locally," which is another way of saying "Impotence is cool."

Me? I want to see a true blue Dem take power and get things done.