Japan’s nuclear watchdog has reported that the level of radiation detected near reactor 2 was 1,000 millisieverts an hour (100,000 millirems per hour).

Japan’s nuclear safety officials have since confirmed that the radiation inside Reactor 2 was caused by a partial meltdown of fuel rods.

TEPCO says the radiation in Reactor 2, which was earlier reported at 10 million times the normal, was actually 100,000 the operating level.

Meanwhile, Japan’s nuclear safety agency has dismissed as unreliable a report by Greenpeace that radiation levels of up to 10 microsieverts per hour had been detected 40 km (25 miles) NW of the nuclear plant. 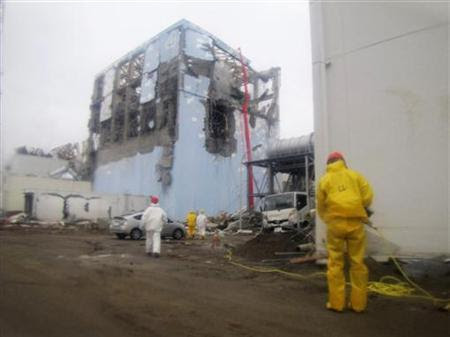 ﻿﻿Fukushima NPP. Workers are seen outside the heavily damaged Reactor 4 on March 22, 2011. Photo by TEPCO, via Reuters.

What is a lethal dose of radiation from a single Exposure?

(Note: Rem is a unit of ionizing radiation equal to the amount that produces the same damage to humans as one roentgen of high-voltage x-rays. Source: MIT)

The latest death released by the authorities put the number of dead at just over 11,000, with about 17,400 people missing.