BIG NATURAL GAS FIND in LEVIATHAN AREA.."Perhaps after all, on the matter of energy, Moses deserves greater navigational credit" 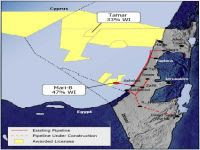 
Did anybody hear about this? I completely missed this - Isn't this a huge deal?? I guess I've been too busy dealing with the aftermath of the ice dams in our gutters for the past few months. 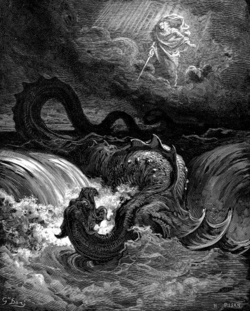 Israelis have always lamented that Moses led the ancient Israelites to the one patch of land in the Middle East bereft of energy resources. It turns out the sea offered more promise. At the end of December, a huge natural gas discovery was confirmed in the Eastern Mediterranean inside Israel’s territorial waters. ......The Leviathan field, discovered by a consortium led by Houston-based Noble Energy, is the world’s largest offshore gas find in the past decade and vaults Israel into the ranks of the largest gas reserve holders in the world. (There are some indications that Leviathan might contain a world-scale oil deposit as well.)

Despite some drawbacks and more details to be worked out, there’s no mistaking the fact that the Leviathan find represents a landmark event in the history of the state of Israel. Perhaps after all, on the matter of energy, Moses deserves greater navigational credit.

Let's check in at PRAVDA... Why is the Leviathan Deposit Referred to as "Israeli"? "Sounds like the groundwork is being laid for some huge war."

Leviathan Gas Discovery Could be The Mother of All Resource Curses


Leviathan aka the Hellmouth Gatekeeper...

The whale-monster Leviathan (translated from Hebrew, Job 41:1, "wreathed animal") has been equated with this description, although this is hard to confirm in the earliest appearances. However in The Whale, an Old English poem from the Exeter Book, the mouth of Hell is compared to a whale's mouth, though somewhat indirectly:
The whale has another trick: when he is hungry, he opens his mouth and a sweet smell comes out. The fish are tricked by the smell and they enter into his mouth. Suddenly the whale’s jaws close. Likewise, any man who lets himself be tricked by a sweet smell and led to sin will go into hell, opened by the devil — if he has followed the pleasures of the body and not those of the spirit. When the devil has brought them to hell, he clashes together the jaws, the gates of hell. No one can get out from them, just as no fish can escape from the mouth of the whale.[8]

Posted by JerseyCynic at 8:51 AM