It was all over quickly.

In a hasty 35-second speech, Egyptian Vice President Omar Suleiman nervously said the words that many Egyptians had been longing to hear:

To put it another way, it was a gentle military coup d'etat. Mubarak shoved off to Sharm el-Sheikh and his private compound there, while the Supreme Council of the Armed Forces took over the government.

To put a final grace note on the Egyptian Uprising of 2011, I offer this photograph taken by journalism student Ghazala Irshad and titled "Broken Bones, Not Spirit": 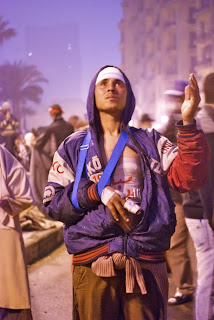