A Wake Up Call for Sarah Palin? 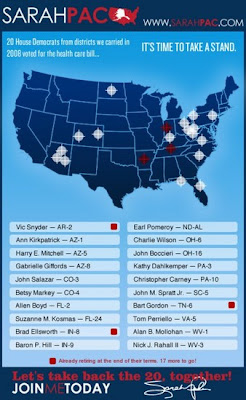 SarahPac.com took this image down after Rep. Gabrielle Giffords (D-AZ) along with others was shot yesterday morning in Tucson Arizona. (click on image for larger view)

ENOUGH WITH THE GUN RHETORIC ALREADY
I'm not saying Palin is responsible for this event, but it's people like her that get the mentally unstable among us riled up. Why the crosshairs, Sarah Palin? Believe it or not the majority of Americans do not revere the almighty gun. The majority of us live in densely populated, educated and civilized areas. To prove the point, in my district, we ousted a congressman because he took money from the NRA.

Guns are dangerous in the wrong hands. The last time I looked, there was no movement whatsoever to take anyone's guns away. Sure, there is talk about it all the time by the radical right, but it is unfounded and only used to misinform their constituents to keep them frightened.

Ironically, the very people who work in or for the government (or political parties) are the ones who love to instill fear of government in their constituents.

WITH FREEDOM OF SPEECH COMES RESPONSIBILITY
People like Palin who are against Americans having access to healthcare (and that includes mental healthcare) ought to be more responsible when using deadly images and rhetoric for political gain. A lot of unstable folks (who need healthcare) have guns... and televisions. I do not support a ban on guns, but I do support a ban on using violent language/images in politics especially when they are not dealing with facts but opinions and talking points. The right to free speech comes with responsibility and someone forgot to tell Sarah Palin about that.

THE ANTI-WOMAN
Sarah Palin is anything but loving, nurturing and strong. She is weak, easily manipulated and filled with lust for money and power. It pains me to meet women who support her, but doesn't surprise me that so many men find her message appealing. She's one of the guys (only with boobs.) I can only hope and pray that she will wake up and see the light. Hopefully she's made enough money by now to invest it wisely and go off into the sunset and STFU.

Real women ought to get together and get this clown out of the media spotlight. Sign me up.

UPDATE SUN NIGHT
I just got this via email coincidentally. I guess I'm not the only person who connected the "cross hairs." Tell Sarah Palin: Violent threats have consequences- a petition.

How can anyone not be haunted by the prophetic words of Rep. Giffords herself in March 2010, after her office was vandalized, threats received, and her name and district identified by Sarah Palin in her infamous crosshairs:


Imagine the consequences if Palin were to apologize for her use of targeting imagery, pledge never to demonize her opponents in such a way again, call on all of her passionate followers to pledge to do the same, and promise that she will call out those in the media who do not follow her lead.

Posted by Liz Blondsense at 9:32 AM