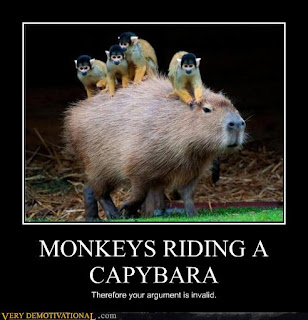 First, allow me to say that I don't drink enough to poison myself, and never have. I dislike vomiting and think cirrhosis is a tad icky.

So I toasted in the New Year with a wee dram of whiskey well-watered with ginger ale, hummed "Auld Lang Syne" in pidgin Klingon just for fun, and was asleep by about 12:30.

Most of the night had been consumed in the Iron Chef marathon and in a bit of reflection, as I can look forward to the start of my fifth decade in this Best of All Possible Worlds (tm). I can look back on a life well-spent and rich in horrors.

But enough of that. A new year dawns! Let's go to the news desk!

Troublemakers have set off bombs in Egypt and Nigeria, we reportedly whacked another "top Taliban official" in Afghanistan, Afghan President Karzai is thumbing his nose at us while pining for the halcyon days of the Bush Administration, and my state government will fall into the hands of a scam artist on Tuesday.

The scam artist in question is (p)Rick Scott of Florida, a Republican I'll have you know. Like many modern Republicans (which probably includes most of the GOP-dominated state legislature), (p)Rick believes in the Underpants Gnomes Theory of Economic Growth:
1. Cut taxes
2. Cut spending on services (education, etc.)
3. Everybody wins!

But it doesn't work that way, unless it's all part of the basic Republican plan to reduce as many people as possible to economic serfdom, leaving most of the population stupid, ignorant, poor and fearful - and therefore malleable.

In other news, the national GOP is squealing like abused goats at how much the departing Congress was able to accomplish between Election Day and now. Chief among these is the DADT repeal, which has the American Family Association clad in sackcloth (from Armani, of course!) and wailing about the end of America.

Quite naturally, the rancid core of the Party, the so-called "Tea Party," is still up in arms and is planning on removing the people it helped vote into office. The war within the Party can only get better, and it's fun to watch. Of course, we still have Rush, Glenn and their slimy ilk cheerleading on the sidelines while all the time disclaiming responsibility if their inflammatory rhetoric kills someone.

(I will give you the mental image of Rush Limbaugh in a cheerleader uniform, and you can thank me later, okay?)

The collection of bums, also-rans and never-have-beens known as the GOP Presidential candidate field lost Tim Pawlenty last month, and will probably lose Haley Barbour of Mississippi and Dumbass Christie of New Jersey. Good times, and get out the popcorn - the GOP primaries in 2012 will be fun to watch.

I plan on enjoying my New Year's Day by watching a parade, watching some football (I'm currently watching Manchester United and West Bromwich Albion), and baking a loaf or two of bread.

So buckle up, keep calm and carry on, because it's going to be a fun year!