This is absolutely fascinating.

The Geography of Gun Deaths by Richard Florida at The Atlantic. 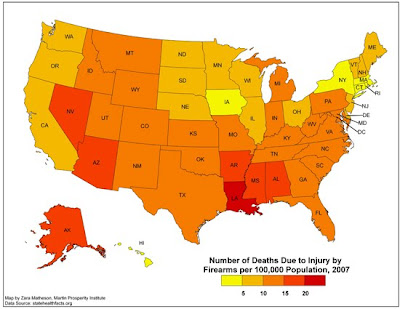 Richard Florida studied this map and then on a state by state level then "charted the statistical correlations between firearm deaths and a variety of psychological, economic, social, and political characteristics of states." Interestingly there was no correlation between gun deaths and illegal drug use, mental illness, higher levels of inequality or unemployment.

So what are the factors that are associated with firearm deaths at the state level?

Poverty is one. The correlation between death by gun and poverty at the state level is .59.

And, not surprisingly, firearm-related deaths are positively correlated with the rates of high school students that carry weapons on school property (.54).

What about politics? It's hard to quantify political rhetoric, but we can distinguish blue from red states. Taking the voting patterns from the 2008 presidential election, we found a striking pattern: Firearm-related deaths were positively associated with states that voted for McCain (.66) and negatively associated with states that voted for Obama (-.66). Though this association is likely to infuriate many people, the statistics are unmistakable. Partisan affiliations alone cannot explain them; most likely they stem from two broader, underlying factors - the economic and employment makeup of the states and their policies toward guns and gun ownership.

And for all the terrifying talk about violence-prone immigrants, states with more immigrants have lower levels of gun-related deaths (the correlation between the two being -.34). 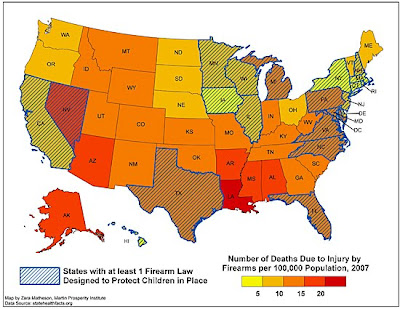 And what about gun control? As of July 29 of last year, Arizona became one of only three states that allows its citizens to carry concealed weapons without a permit. Might tighter gun control laws make a difference? Our analysis suggests that they do.

While the causes of individual acts of mass violence always differ, our analysis shows fatal gun violence is less likely to occur in richer states with more post-industrial knowledge economies, higher levels of college graduates, and tighter gun laws. Factors like drug use, stress levels, and mental illness are much less significant than might be assumed.

Interestingly, I live in a vastly overpopulated and THE most unhappy state- New York. Yet the death by gun rate is only 5 per 100,000 people. Maybe that statistic will cheer up New Yorkers, but I doubt it... we're also one of the highest taxed states and currently, it's almost impossible to find a job with benefits that pays a living wage. If there wasn't strict gun control would we be shooting each other up? I don't know... there's a lot of pushing, shoving and "get out of my way, you asshole" talk on the streets. We have so many immigrants here that sometimes I wonder what country I'm in when I'm at an event and clearly one of the few people who speaks English. Still wondering if anyone who works at the TSA in NY was born in this country.

It is also interesting to note that if there is going to be another US terrorist attack, it will most likely happen in NY and you don't see Second Amendment knuckleheads running around urging citizens to arm themselves.

after checking out the article, what do you notice about your state and your experiences? I'm curious.
Posted by Liz Blondsense at 6:58 AM