The War on Christmas in the NY Metropolitan Area Part II

This is the Catholic League's answer on the other side 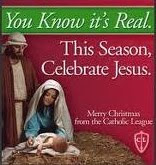 I saw the story on the news and chuckled. Oh the irony. I wonder if anyone at the Catholic League ever studied in a Catholic Seminary...

One of the first things I learned when I studied the synoptic gospels in the Catholic Seminary where I earned my masters degree in theology was that the Christmas story is a recycled myth. Didn't happen. Let me tell you.... I pouted when I heard that. We made the professor repeat it. Most of the class pouted come to think of it. But then again, the story is pretty far fetched when you stop and think about it, isn't it? But we humans like fairy tales. They make life more palatable. They give a reason to the unreasonable.

I never did get a proper answer from any of the professors or theologians as to why this information hadn't been released to the sheep... I just assumed that it would cause a crisis of faith worldwide. Waddaya mean baby Jesus wasn't born in a manger to a virgin? Oh man. Bummer. I'm not buying any more presents on the day after Thanksgiving.

Roman Catholics understand that the book of Genesis is a myth and it didn't cause a crisis of faith for them to accept that the ridiculousness of the creation story was just to convey the point that the universe was somehow created by a supreme being. But then again, there is no shopping season associated with the creation of the world. Religion means big business... especially at the end of the fiscal year.

I wonder if the earliest Christians understood that it was a myth. I wonder if they believed in angels. I was always curious as to exactly what kind of angel supposedly came down and told the virgin that she was to conceive a child without having sex. Was it an alien? Why did Joseph believe her? Would you believe your pregnant girlfriend whom you didn't have sex with that she was miraculously impregnated by god? Why did anyone reading the narratives believe it? Was the bright star actually the mother ship that sent telepathic messages to astrologers from other lands? Maybe there really are sky gods! What is an angel or a son of god exactly and why did they all go away when Jesus and Mary were assumed into heaven? Was the Holy Ghost a hologram? Hmmm? Oh wait. That's right. It's all made up... but I still wonder why people believed it.

Getting back to the news story.... the atheist spokesman said that he wanted the billboard to be a reminder to closeted atheists that they can come out now. Perhaps it was political posturing because confessed atheists only make up 16% of our US population and word on the street is that there are tons more of us out there afraid to come clean. That's a pretty formidable lobby though, if you ask me. Think about this- Jews do pretty well for themselves in DC and they only represent 2% of the population. Economically speaking, it's fiscally irresponsible to bring up the Christmas myth during the time of year that can make or break our economy. We also like our Christmas parties, our bonuses (well we used to when they used to give them out), the decorations, getting presents, Santa Claus, our Christmas vacations, and so on... maybe it's not such a good idea to try to get closeted atheists on board this month. But that's just my opinion and of course, I'm probably wrong...

What do you all think? I'm open to any and all opinions.


Be sure to scroll down to Jersey Cynic's post "Colbert's "Blitzkrieg on Grinchitude" ....The war on the war on Christmas" for the details of the billboard wars in NYC/NJ on either side of the Lincoln Tunnel

And Happy Holidays to you!
Posted by Liz Blondsense at 9:00 AM