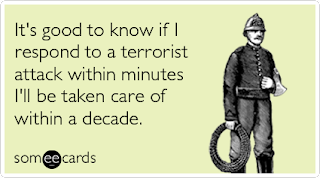 Update at 2:32 p.m. ET: By a voice vote, the Senate just approved a measure to help 9/11 first responders pay health care costs related to diseases they developed from exposure to harmful elements at ground zero.

"Senators have struck a deal to approve the James Zadroga 9/11 health bill, New York's Daily News says it "has learned."

CNN and the Associated Press are also saying it has heard that a deal's been struck.

We reported yesterday that Sen. Tom Coburn, R-0K, was planning to block a vote on the measure because he wanted to see its paid for by spending cuts from other parts of the federal budget.

According to the Daily News: "The initial Zadroga bill called for a 10-year, $7.4 billion treatment and compensation package. To win GOP support, the proposal was trimmed down to 5 years at $4.3 billion."

Named for a New York City police detective who went to ground zero after the Sept. 11, 2001, terrorist attacks and died five years later of respiratory disease, the measure aims to help first responders and their survivors cope with the costs of medical bills related to illnesses suffered because of their exposure to the toxins at the scene.

And my 2¢
by blondesense liz

The stinking hypocrites of the GOP can kiss my big fat ass. How the hell dare they think they can own 9/11 and not take care of those who rescued so many people on that fateful day 9 years ago? I am just furious. This blog has been following the nonsense for nearly 7 years now... and I just can't believe this is even a political issue.... well yes I can. If you can come up with money to engage in neverending wars and occupation of other countries, you can afford to take care of those who defend our homeland in an emergency. There is no excuse.

So how do we make it that congress doesn't retain their healthcare bennies after their service has expired and how do we force term limits on them? It's time to make a huge stink.
Posted by Liz Blondsense at 8:36 AM