Colbert's "Blitzkrieg on Grinchitude" ....The war on the war on Christmas

I coughed up a lung watching this one -- a 10 on my loogieometer!!

Colbert: "Those athiests are kicking us in the jingleballs"

Their new billboard at the entrance of the Lincoln Tunnel:

Colbert" "What part of three kings following a star through a desert to bring presents to an immaculately conceived baby God they dreamed about sounds like a myth to you?"


The Catholic League has "counter-punched" with their own billboard as you exit the tunnel:

"...and just like Jesus says, if someone slaps you on the cheek, COUNTER-PUNCH!" 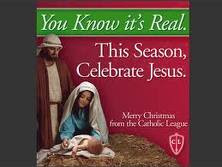 Colbert: "These billboards have prompted the Tunnel Authority to put up their own billboard: Jesus Christ, Watch where you're driving!"

just finished watching the rest of the Colbert Report. OUTSTANDING! David Stockman interview is a must see!! Deficits REALLY DO MATTER -- on ALL levels. ( Is that why he left blackstone -- because he finally found the truth (or did he?) mebe...

via, nofactzone: Mr. Stockman likened the last 30 years in America to a party, “…like none other in history,” further saying that it is time for the country to, “…sober up.” It never ceases to amaze me that in the past 30 years, we have grown our National debt from $1 trillion dollars to $14 trillion. This type of growth is great if you’re talking about a Sequoia tree, but not a debt for our country. That is alarming! In Stockman’s words, “We are burying our children and our grandchildren in this debt, and it needs to stop.”

Posted by JerseyCynic at 5:49 AM