And what is, is actually fairly clear.

The picture below is cropped from a recent issue of The Atlantic, and the little red arrow points to Rich Iott, a Republican who's running for US Congress from Ohio's 9th District. One of Mr. Iott's hobbies is historical re-enactments, and he and a bunch of his buddies enjoy dressing up as members of the Waffen SS 'Wiking' Division. 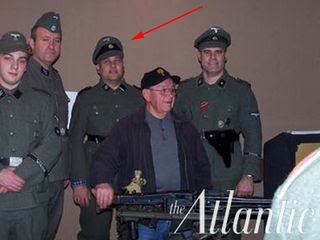 I have nothing against war re-enactors (apart from a desire to have them use live ammunition on each other - let's be real here, folks!) but dressing up and playing as members of the SS? According to the original Nuremberg War Crimes Trials papers, the Schutzstaffeln or SS was declared to be a criminal organization. Wearing the uniform or possessing memorabilia is a crime punishable by prison time in Germany and Austria.

And THIS wants to be a US Congressman?

It should come as no surprise whatever that Iott's also a darling of the Tea Party set.

And, hey! Here's a fun fact or two to kick off Monday!

The symbol of the SS Division Wiking (which was a 'foreign' division, made up of Danes, Norwegians, Belgians as well as Germans) is this:

This is known as a Sun Wheel or Sun Cross.

It's also a symbol of the ultranationalist, white supremacist Christian Identity movement.