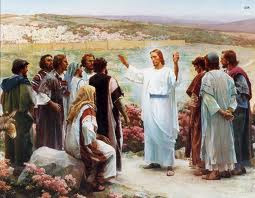 The Unexpurgated Bible #42
"Go ye into all the world, and make friends on Facebook.
He who accepts your friend request shall be saved;
he who doesn't shall be damned."﻿
by Fearguth @ bildungblog

I can't believe I'm even contemplating this. I've fought my kids about "social networking" since myspace. I lost.
I still ridicule them pretty regularly about facebook though. It's just one of those pet peeves I guess. Maybe it's because I'm a long time blogger and don't understand. Are they similar?

The only reason I am thinking about this is because I'm trying to sell tickets to a fundraising dance for the Music Department. It was suggested that I put the word out on my facebook page. I was surprised how many of the over 50 crowd is "on the facebook"

Is it really a good place to network? I guess I can see how it would be.

I can't bear to ask my kids for assistance in setting this up. I may need your help.

I've heard it can be very addicting and I've got quite an addictive personality. Any tips on how to avoid being totally sucked in?
I suppose I could just take it down in a few weeks after the dance if I found myself to caught up.

Who knows, maybe it will be on to twitter next!

or maybe I'll just keep them as written -- There was no president or executive agencies or judiciary. There was no tax base. There was no way to pay off state and national debts from the war years.