And they're worried in D.C. about school lunches...

...and our kids getting fat yet they won't do a damn thing about the way business is killing us with what passes for "food" these days.
Maybe a "vegetable" diet of Ketchup ain't so bad after all, eh Ronnie? 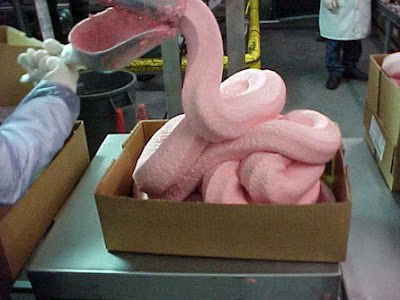 The photo has been extensively passed around today, and for good reason: it's a peak into the rarely-seen world of mechanically separated meat, or Advanced Meat Recovery (AMR).

Someone figured out in the 1960s that meat processors can eek out a few more percent of profit from chickens, turkeys, pigs, and cows by scraping the bones 100% clean of meat. This is done by machines, not humans, by passing bones leftover after the initial cutting through a high pressure sieve. The paste you see in the picture above is the result.

But, hey, at least it tastes good, right?

The resulting paste goes on to become the main ingredient in many of America's favorite mass-produced and processed meat-like foods and snacks: bologna, hot dogs, salami, pepperoni, Slim Jim-like jerkys, and of course the ever-polarizing Chicken McNugget, where the paste from the photo above was likely destined.