An ironic thing happened to me in Salem, Mass on Sunday 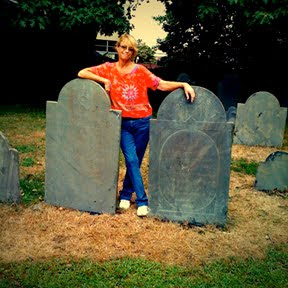 My friend and I were in the hotel elevator in Salem, Mass on Sunday afternoon and a gentlemen joined us for the ride. He seemed friendly enough and asked us where we were from.

"New York,"said my friend in his NY accent.

I quickly thought that there was no need to clarify that we were from the NYC metropolitan area part of NY. Neither of us asked where he was from. I don't know why. He didn't sound like he was from the northeast though.

He asked what we thought about the 'mosque going up on Ground Zero.' My friend replied that people are making too much of a big deal about it. The man looked disappointed.

"We still have freedom of religion the last time I looked," I said.

Mind you, this was a quick elevator ride, but the man went into the whole thing about what if the US were to put a monument to the Enola Gay at Hiroshima as we arrived at his floor. I looked at him as if he were crazy to make such an analogy and commented that it wasn't the same thing, but there was no time to go into my whole diatribe that you can't compare a military strike to a terrorist attack, that the Muslim religion didn't attack the WTC... etc etc. I think one of us mentioned that it wasn't a mosque going up either... that being a point people seem to overlook.

My friend and I continued to talk about it on our way to the room, rolling our eyes and commenting on just how ill informed people are. We probably 'god damned' Fox News and the GOP strategists too for turning the citizens of the US into such ill informed idiots.

It struck me a while later that it was so darn ironic we would run into someone like that in Salem, Mass, which is famous for its religious intolerance and hysteria in the late 1600's. We were right smack in the middle of the historical district where everything was geared to this part of history. I wondered if this visitor to the Witch City, as it's called, was saddened by the fact that the hysteria faded almost as quickly as it started and not saddened by the stories of how innocent people were accused of things so ridiculous it makes your head spin. I guess I'll never know.

PS. Salem is a great place to visit for a day or two. It's very pretty, quaint, historic and compact. You can walk to everything. There's a lot to do and the food is very good. Nathaniel Hawthorne's House of Seven Gables is there.