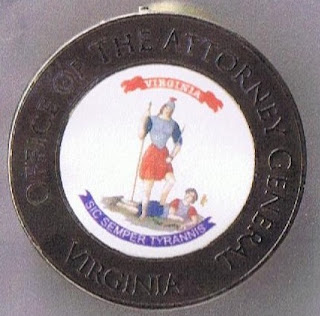 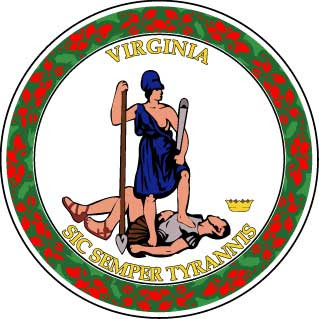 It seems that our "founding fathers" were a lot more liberal than the nutcases running the show today. Virginia's attorney general Ken Cuccinelli was so bothered that the goddess of virtue, Virtus, on the Virginia seal had her breast exposed (see left) that he ordered his staff to replace the Virginia seal on their lapel pins with one where Virtus' bosom is covered by an armored breastplate. (see right) Notice that the offending breast is illustrated by a letter "U" with a dot in it. How very shocking!

Look closely at the illustrations. (I think they open larger if you click on them)

In the original version, bare breasted Virtus seems to have really defeated the guy under her foot. He's on his back unconscious and his skirt is pulled way up his thigh. Tits have power!

In the new version, the man under Virtus' foot has a longer more modest skirt on, his genitals are facing down and he is twisting around to look up her dress! He appears to be digging it.


More about the Virginia Seal

Roman mythology defines the unique Great Seal of Virginia. The obverse of the seal features the Roman goddess Virtus standing over a defeated opponent. Virtus is dressed in Amazonian garb, and holds a spear and a sheathed sword. She represents the virtues of heroism, righteousness, freedom, and valor. She stands in a classical victor's pose over a fallen tyrannical foe, whose crown lies on the ground. The state's motto "Sic Semper Tyrannis" ("Thus Always to Tyrants") appears at the lower edge. The seal was approved at Virginia's 1776 Constitutional Convention, and the principal designer is said to have been George Wythe. A committee composed of Wythe, George Mason, Robert Carter Nicholas, and Richard Henry Lee collaborated on the design. In 1930 another committee was charged with standardizing the seal's design because of all the variations that came into use over the years. What the committee approved was basically adopting the 1776 seal as the standard. In 1949, another standard was implemented, when Virginia's Art Commission defined the official color scheme for the seal.

Posted by Liz Blondsense at 9:40 AM