Where were these people when bush was ravaging the constitution?

Militia movement will be packing heat at rally on the Potomac
By Ann Gerhart
Washington Post Staff Writer
Monday, April 19, 2010; A03

Daniel Almond, a three-tour veteran of Iraq, is ready to "muster outside D.C." on Monday with several dozen other self-proclaimed patriots, all of them armed. They intend to make history as the first people to take their guns to a demonstration in a national park, and the Virginia rally is deliberately being held just a few miles from the Capitol and the White House.

Almond plans to have his pistol loaded and openly carried, his rifle unloaded and slung to the rear, a bandoleer of magazines containing ammunition draped over his polo-shirted shoulder. The Atlanta area real estate agent organized the rally because he is upset about health-care reform, climate control, bank bailouts, drug laws and what he sees as President Obama's insistence on and the Democratic Congress's capitulation to a "totalitarian socialism" that tramples individual rights.

"What I think is important to note is that many of the speakers have really threatened violence, and it's a real threat to the rule of law," Josh Horwitz, executive director of the Coalition to Stop Gun Violence, said of the program for the armed rally. "They are calling health care and taxes that have been duly enacted by a democratically elected Congress tyrannical, and they feel they have a right to confront that individually."

On the lineup are several heroes of the militia movement, including Mike Vanderboegh, who advocated throwing bricks through the windows of Democrats who voted for the health-care bill; Tom Fernandez, who has established a nationwide call tree to mobilize an armed resistance to any government order to seize firearms; and former Arizona sheriff Richard Mack, who refused to enforce the Brady law and then won a Supreme Court verdict that weakened its background-check provisions.

Those coming to the "Restore the Constitution" rally give Obama no quarter for signing the law that permits them to bring their guns to Fort Hunt, run by the National Park Service, and to Gravelly Point on the banks of the Potomac River. Nor are they comforted by a broad expansion of gun rights in several states since his election.

The brandishing of weapons is "not just an impotent symbol" but "a reminder of who we are," said Almond. "The founders knew that it is the tendency of government to expand itself and embrace its own power, and they knew the citizenry had to be reminded of that."

Countered Horwitz: "Our founders thought they got rid of political violence with the Constitution. That was its point. The basic idea of America is one person, one vote, equality."

Vanderboegh and Horwitz both said: "We have a fundamental difference in worldview."

When they stand on the river banks Monday and preach an activism that sounds to some like sedition, the armed demonstrators will have the full support of the federal government they fear, carefully detailed in the 26-page event permit, complete with the gun regulations of both Virginia and the Interior Department and a commitment to provide fencing, barricades and bike racks for the event. 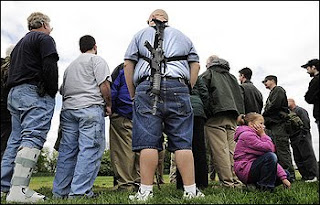 "We handle tens of thousands of demonstrations of a First Amendment nature annually," said Dave Schlosser, spokesmen for the U.S. Park Police, "and we are handling this event no differently than any of the others. We assess what their needs are to allow us to facilitate a safe and successful demonstration so they can exercise their rights to free speech and free assembly without interference."

These folks look like they could use national health care.... I'm just saying.
Posted by Liz Blondsense at 8:51 AM