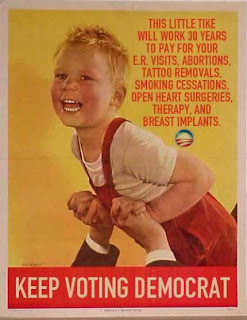 I found this on a wing nut blog. I don't know if this is what most people who oppose health care reform believe will happen or not. There's nothing about forcing insurance companies to pay for these services with my dime in the bills. (Although I am shocked that wing nuts would consider open heart surgery or therapy to be so whimsical.) The insurance industry and big pharm have certainly done a bang up job with misleading PR and paying off the legislators. So far, from what I've read about the "reform", it isn't going to help me or my family at all. We will still be paying enormous premiums to private insurers who just about deny every claim we submit as well as sacking us with thousands upon thousands of dollars in out of pocket expenses for procedures that are not covered and huge co-pays for drugs.

I am most offended when I hear politicians claim that if the government runs health care insurance that we will have death panels. We already have death panels and there are 25 year old bimbos making $8/hour determining whether or not I should be treated for an ulcer. I have the NYS Attorney General's office working on a claim that has been repeatedly been denied by my insurance company. The bimbos who answer the phones won't even put me through to someone in charge. Maybe there's no one in charge?

Speaking of bad PR, I have gotten the impression lately from non-liberals that they believe the first thing we liberal women do when we get pregnant is have an abortion. I laughingly agree and then add that we libs deliberately get pregnant so we can have abortions... not only that, we wait til the 3rd trimester to do so. Then when their mouths are stuck open, I tell them that blue states actually have lower abortion rates than red states because we atheistic, liberal sluts use birth control, ya know. I can be such a bitch.
Posted by Liz Blondsense at 8:43 AM