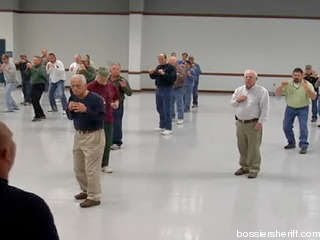 In the event of a terrorist attack, a local militia is being set up in Louisiana to protect BUSINESSES. Nice. What about the people?


These are the middle aged (and beyond) white guys who are practicing hand to hand combat on the left. (click pic for larger image)

A Louisiana sheriff plans to arm volunteers with shotguns, riot shields, batons, and a .50-caliber machine gun mounted on a "war wagon," as part of "Operation Exodus," a program to provide security in the event of a terrorist attack or civic unrest. "It's a calling," he says.

The office of Sheriff Larry Deen of Bossier Parish, near Shreveport in the northwest part of the state, last month selected for the program 200 local residents -- mostly ex-law-enforcement personnel -- and began training them in "defensive techniques in the event of a struggle," reports the Shreveport Times. The plan calls for the new recruits to be sent to protect food from grocery stores, gas from gas stations, and other crucial local resources, should the situation demand it.

and the story goes on here.