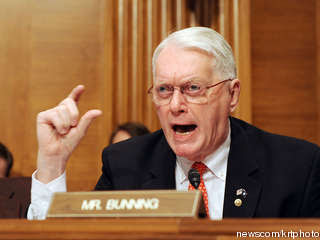 That's Senator Jim Bunning (R-ky) indicating just how much concern he has for his fellow Americans (and probably also indicating how large he wishes his wee wee was. oh I'm sorry. couldn't help it.)

One old man (the oldest Republican in the Senate who is being urged by his fellow Republicans never to run for office again and rightly so) from Kentucky has managed to fuck over his country-people who could use some compassion and some help during these hard times. Maybe the folks in Kentucky are doing so very well that he doesn't give a shit about anyone else. Who knows? Or maybe he's just senile.

According to TPM because of Sen. Bunning's actions for blocking a temporary extension of unemployment and COBRA benefits for out of work Americans, he also managed to force a mandatory pay cut for doctors by triggering a 21 percent fee reduction to doctors seeing Medicare patients starting today. Prevention of the pay cut to doctors was included in the bill that he blocked. Doctors will now be forced to limit how many Medicare and Tricare patients they see in order for them to keep their office doors open. (I guess he doesn't have any elderly constituents.)

From TPM: On a conference call with reporters this afternoon Rep. Chris Van Hollen (D-MD) put it this way: "By his actions, Bunning has prevented people from receiving Unemployment, health care access, transportation projects from going forward, and Doctors who provide Medicare services from getting paid."

Today, for the seventh time, Bunning objected to a request for unanimous consent to temporarily extend benefits. In addition to cutting doctor's fees, his exploitation of the Senate's filibuster rules has cost thousands of out-of-work Americans their benefits and has even put thousands of federal employees out of work.

"...Bunning's objections mean the Transportation Department must furlough roughly 2,000 starting today at the Federal Highway Administration, the Federal Motor Carrier Safety Administration, the National Highway Traffic Safety Administration and the Research and Innovative Technology Administration.
...
Construction will stop on the $50 million 9th Street Bridge replacement project in the District and the $36 million Humpback Bridge replacement on Northern Virginia's George Washington Parkway because federal inspectors cannot report for work. NHTSA employees working with advocacy groups on safe driving programs including the "Click it or Ticket" and anti-texting campaigns will have to stay home."

Bunning is getting a lot of negative media attention and rightly so. When questioned about it by ABC News, the senator gave the news producer the finger.
More on that here and here he is being a super prick today.

Posted by Liz Blondsense at 4:58 PM