What exactly do the Teabaggers want to take us back to?

Teabaggers have nostalgia for the America of the 1950's.
The 50's were only good for white men according to Bill Maher. (around 3:00) 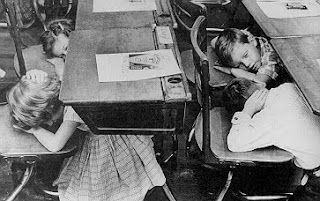 Oh yeah, the 50's were fabulous
You must know a bunch of people, both men and women who "want our country back!" Back to what? Maybe they ought to be careful of what they wish for... or if this is what they truly wish for, maybe we ought to rethink who we associate with.

Watch Duck and Cover from 1952. Learn how to save your life when the atomic bomb goes off. When you see the flash, be sure to duck and cover... or you are dead, baby, dead. This is the queen of all civil defense films that the US government commissioned. More about it at Conelrad. 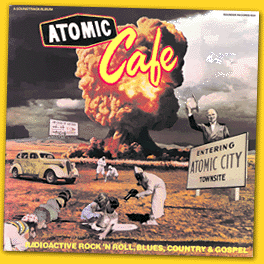 The background music is amazing. I had no idea that so many songs were written about the atomic bomb. Check out Cold War Music.

Read more about Atomic Cafe at Conelrad. I enjoyed this movie so much from an historical standpoint that I got the soundtrack and the picture book. It inspired a whole series of mixed media artwork.

Review:
The Atomic Cafe is a sometimes hilarious, sometimes sobering collection of film clips taken from American propaganda films of the 1950s. The thrust of the production is to expose the misinformation (and downright lies) dispensed by the government concerning the atomic bomb. We are shown vignettes from such classic instructional films as Duck and Cover, wherein school children are assured that they will survive a nuclear attack simply by huddling together next to the schoolhouse wall. In another sequence, a pack of pigs are dressed in Army uniforms and left to die at "Ground Zero" during a nuclear test to see if human beings (who purportedly have the same skin consistency as pigs) could endure such an ordeal. Hal Erickson, All Movie Guide

Posted by Liz Blondsense at 6:53 AM