Super Bowl XLIV Eve.......In remembrence of Hunter L. Thompson and what he might have been writing about tonight

In Father Tyme's post below - HERE'S YOUR FIFTEEN MINUTES... he asked 'What would you say?' I decided to just quote Hunter Thompson


We have become a Nazi monster in the eyes of the whole world, a nation of bullies and bastards who would rather kill than live peacefully. We are not just Whores for power and oil, but killer whores with hate and fear in our hearts. We are human scum, and that is how history will judge us. No redeeming social value. Just whores. Get out of our way, or we’ll kill you. Who does vote for these dishonest shitheads? Who among us can be happy and proud of having all this innocent blood on our hands? Who are these swine? These flag-sucking half-wits who get fleeced and fooled by stupid little rich kids like George Bush? They are the same ones who wanted to have Muhammad Ali locked up for refusing to kill gooks. They speak for all that is cruel and stupid and vicious in the American character. They are the racists and hate mongers among us; they are the Ku Klux Klan. I piss down the throats of these Nazis. And I am too old to worry about whether they like it or not. Fuck them.

". . .and whosoever was not found written into the book of life was cast into the lake of fire..."

Fear and Loathing at the Superbowl (1973)

Also, a fine tribute from RollingStone, 2005

Myths and legends die hard in America. We love them for the extra dimension they provide, the illusion of near-infinite possibility to erase the narrow confines of most men's reality. Weird heroes and mold-breaking champions exist as living proof to those who need it that the tyranny of "the rat race" is not yet final.
-- HUNTER S. THOMPSON, 1937-2005

and Howie Reed, posted on The Voice of the Turtle Here's what he thinks about the quote up top:

This short excerpt should be inscribed on every American passport, driving licence, bank statement, Bible, and all guns and other torture devices. Compared to this, Michael Moore might as well be Brian Sewell. Every time I get upset at these... at these ARSEHOLES running the USA, I look at Kingdom of Fear and think, ‘at least someone else got it as well.’ And it is a crying shame Dr.Gonzo is no longer here to fight against the final death of democracy and freedom in the ‘civilised’ world.

So, what do youl think Mr. Thompson would say to Mr. Smith, the NFLPA Exec. Director, about the impending 2011 lockout? --Union: No 2011 NFL season

“I keep coming back to an economic model in America that is unparalleled,” said Smith, who often repeated phrases for emphasis. “And that makes it incredibly difficult to then come to players and say, on average, each of you needs to take a $340,000 pay cut to save the National Football League. Tough sell. Tough sell.”

I think he'd say: FUCK YOU AND YOURS AND ALL YOUR DELUSIONAL IDEAS ABOUT WHAT THE FUCKING ECONOMIC MODEL IN AMERICA IS (or should be) 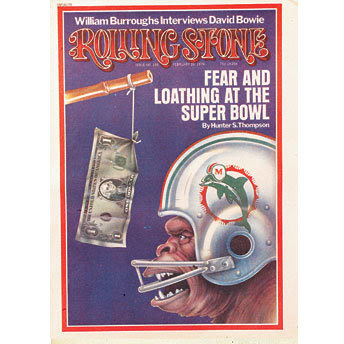 Y'all have a fun Super Bowl Sunday!!

At a couple of a million a pop, I hope with no NFL for 2011 that the money spent on SB ads will go towards hiring some workers instead -- or making a more reliable product, or.......

Daltrey and Townshend ROCKED! (for a couple of old guys)

we won't get fooled again?

I guess only time will tell
Posted by JerseyCynic at 8:39 PM