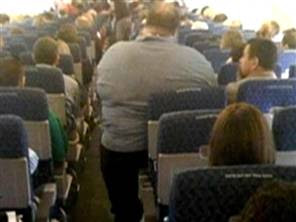 This is the image that has been making the news lately. It's clearly showing that this man is obstructing the flow of traffic in the cabin of the airliner.

Morbidly obese passengers on airplanes clearly need 2 (or even 3 seats). I'm not quite sure that they should be charged extra or not. I suppose you'd have to take it on a case by case basis and then you run into human rights issues- Is this a pleasure trip or an emergency? Is the person's size genetic or caused by medications that cause obesity or by simple gluttony? Who are we to judge? Well it seems that a lot of people do judge obese people harshly. Quite frankly, I'd be mortified to see this guy board a plane I was on. I would try not to judge him although I would hope that his trip was for an emergency and he didn't dare think that he could get away with paying for one seat and inconveniencing other passengers. (And I'm a former fat person.)

I know a lovely couple that are quite tall and quite fat- when they travel (and they like to travel) they buy 3 seats in the bulk head to accommodate themselves which I think is quite a good thing to do and very considerate. They book their flights way in advance to be sure that they will be accommodated. They are realists.

Let's face it, seating in coach is quite squishy even for regular sized Americans (and most regular sized Americans are larger than they used to be). When I was heavy, I barely fit in a seat, needed a seatbelt extension and couldn't put the arm rest down next to me or it would cut off my circulation. I'm tall and I couldn't even move my legs for the whole flight. The last time I flew, I was mortified as to who would be my seat mates. Boy was I lucky that it was a couple of very young kids. On the way home, I was lucky again that I had a whole row because the plane was underbooked. whew. (I didn't need a whole row, but it was nice to have 2 seats). Normally I wouldn't fly anywhere and didn't go anywhere unless I could drive. I would sometimes book first class because the seats were larger. Now that I am a "normal" size, I'd like to give flying a try again... but I am one of the Americans who used to be middle class, even bordering on upper middle class and is now bordering on being poor... so I can't afford to go anywhere. Figures.

How do you solve a growing (no pun intended) problem like this? Should enormous people have to give a medical reason for their obesity or an emergency reason for flying in order to avoid paying for 2 seats? Should the people at the gate allowed this guy to board the plane in the first place?

This brings up another issue near and dear to my heart... why insurance companies won't pay for gastric bypass surgeries. I asked my insurance company if they would pay for diabetic supplies or for a quadrupal bypass for me and they confirmed that those services are covered. Yet they said that they would NOT cover any services related to obesity. I explained that gastric bypass surgery cures diabetes in most cases and reduces the risk of heart disease and many other diseases associated with obesity. In fact, they would save money by paying for gastric bypass surgeries in the first place. They wouldn't hear of it. Luckily I could cash in my 401k and pay for my own surgery. I have fabulous blood pressure now, no chance of getting diabetes, my heart is great, my cholesterol is 146 and all vital signs are excellent. Before the surgery I was a walking time bomb and possibly a very expensive client for the insurance company in the future. In a mere 8 months, I was transformed... but again, I was lucky that I had the money to pay for it (even if I don't have a retirement fund). I'm also lucky that since I'm rather poor now, I don't eat very much (I can't) and I can walk for miles and miles and miles thus saving on gasoline.

Anyone out there care to comment? If you're obese, how do you deal with traveling?
Posted by Liz Blondsense at 7:53 AM