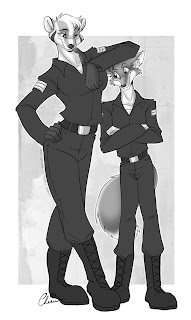 Allow me to introduce Samantha (Sam) Vreeland and her husband Max. She's a badger, standing about five feet nine; he's an Island fox, the smallest of the North American vulpine species (and is very happy with that).

Both of them are dressed in the duty uniform of the Rain Island Naval Syndicate, an anarcho-syndicalist military force found in the Spontoon Island universe. She's a captain, he's a commander. The two of them are the stars of the story Kocha Koi, a story about a pirate submarine.

Artwork was commissioned by a young lady named Cherushi, who can be found at FurAffinity.
Posted by Walt at 8:43 AM