and Uncle Schlemiel Wants You! 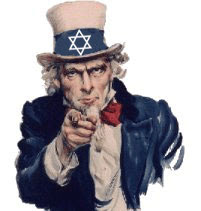 
From The Raw Story GOP senators: US, not Israel, should attack Iran ‘if necessary’

They also say a simple strike at the country's nuclear capability wouldn't be enough -- the US would have to launch an "all-or-nothing" war against Iran with the aim of crippling the country's military capabilities.

"I think an Israeli attack on Iran is a nightmare for the world, because it will rally the Arab world around Iran and they're not aligned now. It's too much pressure to put on Israel," Sen. Lindsey Graham (R-SC) told Fox News' Chris Wallace.

He continued: "If the sanctions fail, and Iran's going down the road to get a nuclear weapon, any Sunni Arab state that could, would want a nuclear weapon. Israel will be more imperiled. The world will change dramatically for the worst. Military action should be the last resort anyone looks at, and I would rather our allies and us take military action if it's necessary."

But Graham doesn't think an attack should be limited to airstrikes on Iran's nuclear facilities. "If we use military action against Iran, we should not only go after their nuclear facilities. We should destroy their ability to make conventional war. They should have no planes that can fly and no ships that can float," said Graham
Sen. Saxby Chambliss, Republican of Georgia, agrees.

"The problem with military action also is that you're probably not going to be able to stop the production of uranium by just a simple airstrike," Chambliss said on Fox News Sunday. "Lindsey's right. It's an all or nothing deal. And is it worth that at this point in time, when we know they have the capability? We can slow them down, but a full-out military strike is what it would take," said Chambliss.

(You can watch the video at the link)
Posted by JerseyCynic at 11:17 AM