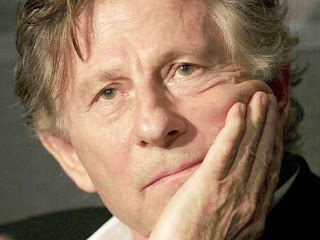 So many people seem to be defending this man. In doing so – they automatically dismiss his victim – a 13 year-old girl, traumatized; betrayed by both family and a man she thought she could trust. But then Roman Polanski is and was a genius – and she was just some 13 year-old girl – disposable, as all girls seem to be in this culture. Why send him to jail after all this time? Who cares? Well for one – I do. As a rape survivor - I'd LOVE to see my rapist go to jail - even after 30 something years. So my sympathy is four-square with the victim here – whether she ‘forgives’ him or not. And I understand why she’s saying that. Poor girl’s been told all her life that SHE ruined Polanski's life. That SHE ruined HIS - not the other way around. So now all she wants is for the whole thing to just go away. I get that. I do. You try and rationalize it. It a survival mechanism.

But he deserves to answer for this – even after all this time. And for those who say what he did is analogous to consensual teen sex – they’re wrong. Read the trial transcripts. This is not a 19 year-old and a 16 year-old having sex in the back of daddy’s car. This is an adult drugging and raping a child. How she presented herself doesn't matter. At 15 I looked 20 - but my rapist knew exactly how old I was. He should have. He was the brother of my best friend.

It’s actually kind of odd that I’d take this tack; considering. You’d think I’d be one of the first in line to excuse him. After the rape – I only dated much older men. My rapist was college aged – young. Young men only seemed interested in one thing from me. Sex. Nothing but hot breath and grabby hands. But older men……they never took advantage (except for one – and he changed my dating criteria). But for all the rest of my teenaged years – I dated men in their 30’s and 40’s – men who took time to know me. Men who never sexually aggressed. Men who waited for me to make the first move. That they all believed I was years older than my actual age is also relevant. They thought they were asking a woman in her twenties out – not some 16 year old. By the time they found out the truth – they were already involved.

So I don’t have any bad memories of this. Through them, I learned to not fear sex – and I thank them from the bottom of my heart for that. I told them I’d been raped – and they understood. Gentle was the word of the day……sex was not the core of the relationship – I was. My wants and needs became paramount. I was treated with reverent respect. But age does not always connote wisdom – a circumstance I discovered by encountering the wrong man. Polanski’s victim discovered that too – that fame and age could be a deadly combination. I shed my mistake w/o lasting damage. I wish I could say the same about Polanski’s victim.

So I say this needs to be dealt with. Finally. Polanski needs to serve adequate time. No muss, no fuss - straight to jail, no frickin' bail. He did this again, BTW – had sex with a minor. Nastassja Kinski became involved with Polanski at age 15. One in what has been a rather long line of ‘Lolita’s’. It seems Polanski likes to have sex with underage girls. That’s a predator in my book. Doesn’t matter what he does for a living, or how many awards clutter his mantle. This isn’t the 1800’s. Artists don’t regularly take teenaged mistresses - and even then it was wrong, societal proclivities notwithstanding. And let's not forget the girl’s mother is all of this. She served her daughter up en brochette to a man she knew was only interested in sex. It's clear from the transcripts and at the time reporting that she envisioned fame for her daughter (and herself) - no matter the sacrifice. I wish like hell she'd been charged as a co-conspirator - but that's my outrage talking. After all - parents are supposed to protect their children - not throw them in harms way.

No – it’s prison for Polanski. Turning him loose now will only add to that poor woman’s misery. She will forever believe she was to blame for all this. I say let justice roll down like waters, and righteousness like a mighty stream – and throw the key away while you’re at it.
Posted by TFLS at 5:42 AM