Michael Jackson - The Elephant in the Room 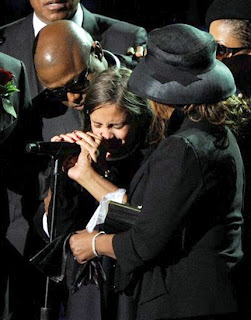 It seems all anyone wants to remember about Michael Jackson are the good things: his music, the love of his family, his charitable works. Laudable, to be sure; but we all know there’s more to Jackson’s legacy than that. Should it be mentioned? Or remain the unacknowledged elephant balancing on that beach ball in the middle of the room? Am I the only one whose attention continues to be drawn towards the center ring?

Every human being is a universe of complexity. We carry within the seeds of unimaginable death and destruction. Most make it through without tapping that darkness. Did Jackson? According to law, yes. The truth? Probably never be known. Elephant in aspic – icky, smelly; preserved forever – indelible and indigestible. So why look at it at all? Good question. Maybe it’s me – my tendency to pick at sores even if they sting - anything to make them go away faster. I’ve spent my entire life trying to understand the genesis of personal demons – those nasty elephants dancing ‘round MY room: Why did my mother hate so damn much? What made my brother so violent? Why did my sister kill herself? Around, and around, and around – addiction, abuse..... So why aren’t I as crazy as Michael? How did I emerge with my soul (and personality) intact?

I have to say I abjure the freak show Jackson encouraged and became part and parcel of. For every cliff I walked up to, looked over and decidedly moved away from – Michael seems to have jumped off willingly with both feet (or so it would seem). And there lies the rub. How many of those dancing elephants he consorted with were really real? To put it bluntly: Did he molest those boys? I cannot even begin to answer that question - because I don’t understand how something like that could happen in the first place. Under what mechanism does the abused become the abuser? What sours in the brain? I have never in my entire life ever intentionally hurt a single living creature. I couldn’t even force myself to – the empath in me begins screaming at the first sign of pain. Hell - I can’t even retaliate in kind when someone does or says something directly to my face. Creating pain is as alien to me as breathing water.

Hurt myself? Now that’s different. Oh yeah – I’ve hurt myself more times than I could count (there’s that inability to retaliate rearing its pacifist head). But just me. Only me. I don’t foist my bad choices (or destructive behaviors) on anyone else. I’m the only one who suffers. So how is that different for others? What satisfaction can be derived from experiencing another’s fear or pain? I can still hear my mother saying over and over that she wanted someone else to ‘understand’ the length, depth and breadth of her own abuse. She‘d tell me this while torturing me, by the way – my tears personal vengeance against her own vicious mother and sister. How on earth this assuaged any of her childhood pain I do not know. The harder I’d cry – the crueler she became. It was as if my tears drove her to be all the meaner. My brother? He’d just laugh. He really got off on it too – a died-in-the-wool sadist, that bastard (may he rot in Dante’s hell for all eternity).

I could never, ever, under any circumstances do anything even remotely like that. I’m incapable of it. So it’s hard to understand (or possibly forgive) Michael Jackson’s sins (if sins there were). Can I ignore them like everybody else and just celebrate the good? I dunno. I’m conflicted. It’s the same when I look at Bing Crosby. All four of the children he had from his first marriage are dead. Two of them committed suicide. All spoke of the dreadful abuse they suffered at his hands. He was a real son-of-a-bitch. Does that make him a bad actor or singer? Depends on your point of view. I look at the affable character he presented on film and wonder……had he injured one of his sons that day? Were they nursing wounds while he frolicked in front of the camera? How did that make him feel? The mind reels. It’s hard to turn off that kind of knowledge – to pretend there’s no elephant there; and as such it impedes my enjoyment of his work. It didn’t use to, by the way – but that’s changed as I’ve grown older. I understand more and tolerate less now. Same with Jackson. I look at his open visage, I listen to his music and I’m left terribly confused.

You see, there’s no denying the man was loved – and not just by his fans or those who depended upon his benevolence either. Jackson had friends, family – people who loved him for who he was and not how much he had. I was particularly affected by his daughter at yesterday’s memorial. Ask me at age 11 if I loved MY mother – and I’d have said no – no way. Feared and hated? You bet! Same with my brother. But Paris really loved her dad. It seemed obvious - though I’ll admit to being troubled at the way she kept grabbing the back of her neck while speaking (though maybe that was just a reaction to Janet’s playing with her hair). Odd behaviors like that often signal hidden emotions. I’d literally pull mine out at that age. Still - somewhere under all Michael Jackson’s Halloween makeup and Twilight behavior lived a decent human being. Can someone like that do evil? What if the answer is ‘no’? What if those elephants are merely constructs – creatures of smoke and fog, lingering because gossip keeps them there? One puff and they’re gone. Then why does the image persist? Why are my eyes still drawn to that center ring? If the accusations weren’t true – why pay twenty-odd million to make them go away? That’s fear talking – fear of exposure.....isn’t it?

More questions than answers, I’m afraid. So those elephants keep dancing, beach balls in tow: around and around and around and around. What’s the truth here? Where’s it hidden? Will the real Michael Jackson please stand up? Thing is – he can’t – not any more. So I’m left with questions and a clinging sense of evil I just can’t ignore. That’s the problem with abuse. It leaves scars that color and affect every single thing. Maybe I’m viewing all this through a distorted prism – seeing things that aren’t really there (on both sides). Like I said before – I guess we’ll just never really know.
Posted by TFLS at 7:27 PM