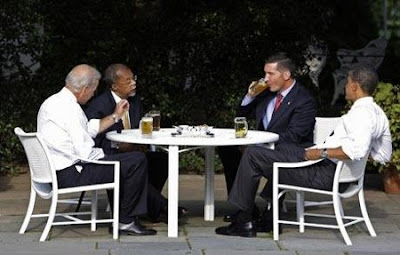 Gates concluded: "Having spent my academic career trying to bridge differences and promote understanding among Americans, I can report that it is far more comfortable being the commentator than being commented upon. At this point, I am hopeful that we can all move on, and that this experience will prove an occasion for education, not recrimination. I know that Sergeant Crowley shares this goal. Both of us are eager to go back to work tomorrow. And it turns out that the President just might have a few other things on his plate as well."

Cambridge police Sergeant James Crowley, after his photo-op with Harvard professor Henry Louis Gates and President Barack Obama, told reporters that no apologies were exchanged and each respective party simply agreed to disagree.

We didn't have a whole lot of discussion about this story on this blog and I'm not sure that everyone would agree with each other about what happened or whether or not Obama should have said what he said about it. While it's not socially acceptable to be a racist in most circles and most people hid that they were racists, the ugly truth is that racism is very much alive and well in America today. White Republicans were appalled at Obama's statement at the press conference, but in all honesty, what do white people know about being black? I think it was good for Obama to bring it up.
Posted by Liz Blondsense at 8:37 AM