Sanford: This is getting juicy 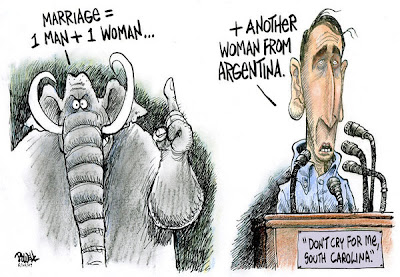 Governor Sanford is back from South Freaking America!

He says he went there to "unwind." How nice.

UPDATE: It appears that he may not have been alone. hmmm. He said he was driving along the coast but it turns out that the coastal highway is ummmm 2 miles.

UPDATE: Oh man, this is rich. The governor spent more than $21,000 of tax payer money on his travel expenses last year including trips to see his mistress in Argentina.

This just gets more insane UPDATE: Notorious cheater and public wife dumper, Rudy Guiliani went on the news to say that Democrats cheat too. Whew. Here I thought that only Republican politicians were big fat cheating pigs with egos the size of New Jersey. Glad that the liberal news media gave him some airtime to clear it up and make everything okay.

UPDATE THURSDAY: Did you read the emails between the governor and his lover? I can't believe that they have been published!
Posted by Liz Blondsense at 1:51 PM