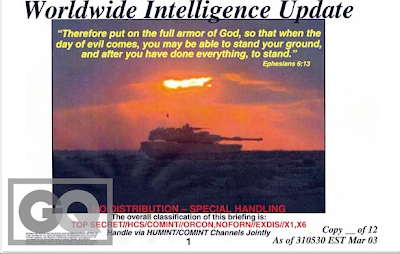 According to this story at RawStory.com, Bible quotes adorned covers of top-secret Rumsfeld intelligence reports

Rummy was kissing up to Bushie who loved his Bible quotes. And it's no small wonder that so many knuckleheads supported the clusterfuck that was the War on Iraq.

"Less than one month after U.S. and coalition forces invaded Iraq in March 2003, a “Worldwide Intelligence Update” reached then-President Bush with the following quote on the cover of the briefing, above photos of jubilant Iraqi crowds in newly liberated Baghdad: “Behold, the eye of the Lord is on those who fear Him…To deliver their soul from death.”

One week earlier, on April 3, 2003, another of these reports reached Bush, and its cover contained a passage from the book of Proverbs: “Commit to the LORD whatever you do, and your plans will succeed.”"

You can see the covers at GQ's slide show. Sheesh. Scary stuff, folks.

See also Frank Rich's take on this.
Posted by Liz Blondsense at 8:47 AM