For all his supposed acumen as a historian, Newt Gingrich (R-Adultery) seems to have a number of blind spots in his education. In his latest sin against accuracy he was heard to opine on the Sunday chat shows (which, incidentally, give this monumental loser way too much air time) to the effect that President Obama's handshake with Venezuelan President Chavez was something no Republican President would do.

Apparently, Gingrich and others of the chattering classes say, Republican Presidents don't sit down and be chummy with repressive anti-Americans.

Well, here's Richard Nixon in 1972, getting chummy with Leonid Brezhnev, hardline Communist and well-known for inveighing against Those Darn American Imperialists: 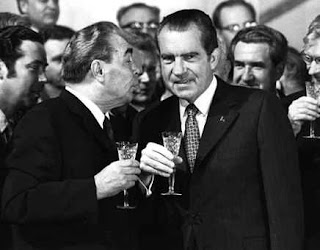 And here's Gingrich's One True God, the Great And Sainted Ronald Reagan, - gasp! - shaking hands with Mikhail Gorbachev, another one of those naughty Soviet fellows.

There are other pictures, of course, of Republican leaders, good Americans all ("So are they all, all honorable men") shaking hands and getting chummy with all sorts of repressive types who took our money and got the photo op and then went on to call us all kinds of nasty names.

Who can forget the immortal picture of Donald Rumsfeld shaking hands with Saddam Hussein back in 1983? Of course, Saddam was our boy back then, consecrated by the Sunni Gulf States with the task of keeping back the purported Shiite radical tide - which he did by using chemical weapons supplied to him by the United States.

Newt also had unkind words to say about the book that Chavez gave Obama, which describes the exploitation of the Americas by the Western powers over the centuries. Newt's short memory seems to get even shorter here.

Can he deny that the Spanish and Portuguese extracted gold and silver from the Americas by using forced labor in conditions little better than slavery?

Can he deny that many in Washington over the years considered the Monroe Doctrine a carte blanche to impose our will upon the Americas?

Can he deny that the CIA toppled the Allende regime in Chile in 1972, installing the vicious thug Augusto Pinochet to begin a reign of terror in that country?

Can he deny that the CIA fomented a coup d'etat in Guatemala in 1954 to help the United Fruit Company maintain its hold over its plantations in that country?

Can he deny that we invaded and occupied Haiti in the 1920s?

Can he deny that we concocted a rebellion in Panama to wrest it from Colombia in order to build an Isthmian Canal without interference?

And this is just what I know, off the top of my head.

Pity Newt's memory is apparently starting to fade on him.
Posted by Walt at 5:51 PM