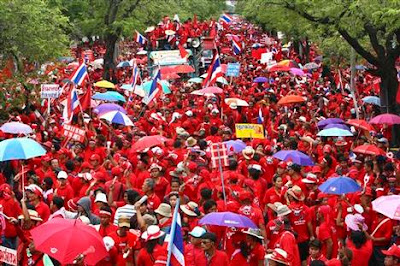 Protesters flooded the street outside Prem's residence and spilled over to the Royal Plaza, a large historic square nearby. The crowd continued to swell as evening approached but this year's boisterous demonstrations have so far remained peaceful.

"Brothers and sisters, come out. If you love democracy, come out! If you want an end to elite rule, come out!" protest leaders aboard trucks shouted through megaphones. "Abhisit, get out! Prem, get out!"
Protesters have accused the country's elite - the military, judiciary and other unelected officials - of interfering in politics.

Posted by JerseyCynic at 7:38 AM