Can you say, adios...boys and girls? 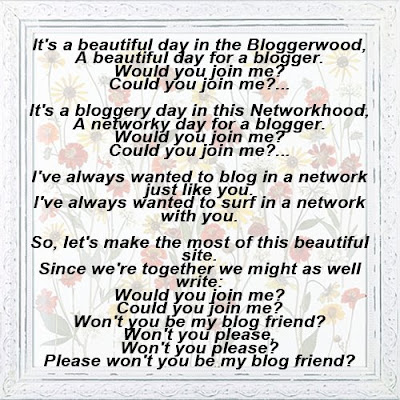 Lassie rescued Timmy from the well!

Somewhere, near Mr. Ribbet’s Networkhood, the mail is only being delivered with a smile, trolleys run on time and all’s well with Lady Aberlin and the world!


In the news today:

Flowers are bloomin'.
The hills ARE alive, with the sound of music.
June Cleaver just got a new gown to wear for breakfast.
Harriet Nelson got a birthday card from Ozzie.
John-Boy finally got his typewriter.
Baby Jessica is doing fine.
The Osmond’s are singing up a storm.
Lawrence Welk just appeared on Howdy Doody...with the King Family.
Wasn’t that song by Dennis Day just swell?
Captain Midnight and Sky King just rounded up a gang of bad guys.
Pat Boone just drank a lot of milk!
Hoppy just headed them off at the pass.
Every night my honey-lamb and I,
sit alone and talk,
and watch a hawk,
makin' lazy circles in the sky.
And I'll stay younger than spring.


And so, as I ride off into the sunset…