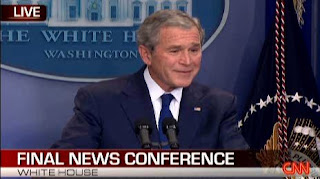 Bush held his final news conference this morning. I sadly missed it but will watch it online. Various websites are reporting the "highlights."

Bush On Katrina: ‘Don’t Tell Me The Federal Response Was Slow’

Bush: It ‘may be fair’ to say that ‘Republicans don’t like immigrants.’

"Clearly putting a mission accomplished on an aircraft carrier was a mistake," he replied when asked what he'd done wrong under his watch.

"Some of my rhetoric has been a mistake."

"I've thought about Katrina," he added, without identifying particular errors in judgment.

"Abu Ghraib obviously was a huge disappointment," he continued. "Not having weapons of mass destruction was a big disappointment."

He seems to think that nothing he had done was wrong but things he said.
Yesterday in an interview with Faux News' Brit Hume, bush admitted to authorizing torture.

How many more days until this dimwit moves back to Texas?
Posted by Liz Blondsense at 12:04 PM