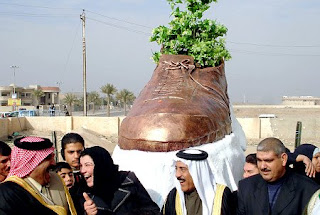 It's nice to see the Iraqi's smiling again.

"Many Iraqis considered it poetic justice when a journalist tossed his shoes at President George W. Bush last month.

Now the bizarre attack has spawned a real life work of art.

A sofa-sized statue of the shoe was unveiled Thursday in Tikrit, the hometown of the former Iraqi leader Saddam Hussein.

Baghdad-based artist Laith al-Amari described the fiberglass-and-copper work as a tribute to the pride of the Iraqi people.

The statue is inscribed with a poem honoring Muntadhar al-Zeidi, the Iraqi journalist who stunned the world when he whipped off his loafers and hurled them at Bush during a press conference on Dec. 14.

continued
Posted by Liz Blondsense at 8:41 AM