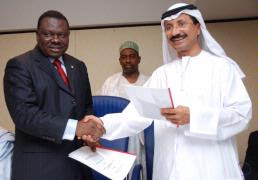 DUBAI, United Arab Emirates (AP) - Dubai said Sunday it has reached a deal with Nigeria to invest in the African nation's conflict-ravaged oil industry and other sectors of the economy.

Under the deal, Dubai Natural Resources World, a subsidiary of state-owned conglomerate Dubai World, would manage the development and output of Nigeria crude oil and gas reserves. Dubai World called the agreement "far reaching," but provided few details, including the financial terms.


Dubai Natural Resources World spokesmen said they could not clarify what specific areas of Nigeria's energy sector were involved, nor were they willing to provide additional details about the agreement or make officials available to comment.

Abuja - 18th January 2009: Dubai World, one of the largest holding companies in the world, announced today that it has signed a far-reaching cooperation agreement with the Government of the Federal Republic of Nigeria for investment in a number of key sectors in the Nigerian economy.

far-reach·ing (fär'rē'chĭng)
adj. Having a wide range, influence, or effect: the far-reaching implications of a major new epidemic.

“What African countries need are partners who want to tap into all their resources, including human resources, and profit from the growth of the entire economy, the type of growth that is a benefit for all,” Sharaf said.

I still can't find any names...

nothing but "UAE Companies"

anyone?
Posted by JerseyCynic at 11:40 AM