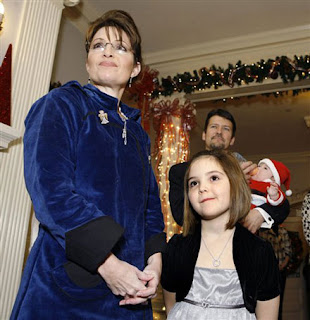 Is Sarah Wearing the Draperies?

3,300 visitors poured into the Alaska Governor's Mansion on Tuesday for the annual Christmas open house hosted by Governor Sarah Palin.

Palin, who drew fierce criticism during her failed GOP veep bid over her lack of preparedness and her expensive wardrobe makeover, defied the critics by downgrading from Dior and wrapping herself up in a velvet kuspuk (that’s Aleutian for “sack”).

The arctic Rockwellian festivities in this tundra playground consisted of guests moving to the dining room where a table filled with over 20,400 cookies purchased for the event were on display, including raspberry and pecan tartlets, Russian tea cakes, chocolate crinkles, dark chocolate almond roca, plus plates and plates of fudge. Along one wall, visitors could view gingerbread houses created by sixth-graders at Dzantik'i Heeni Middle School, including a gingerbread Eiffel Tower and a gingerbread tree house. Around the corner was the conservatory and a winter tableau with a model train.

The mansion had recently undergone upgrades, including the plumbing to accommodate over 3,300 visitors within a three hour period of time. Sarah made no promises to run for president in 2012. Merry Christmas!