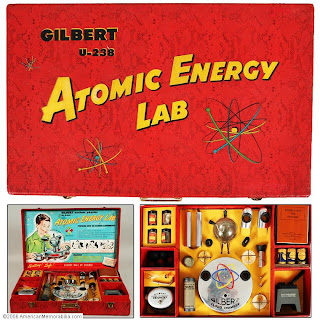 In the 1950's during the atomic age craze you could buy your kids an "Atomic Energy Lab" complete with chunks of Uranium 238. This product only lasted on the shelves for a year when someone thought that kids capable of splitting atoms in their bedrooms and messing around with radioactivity was not a necessarily a good thing.

Fast forward to the 1990's when naysayers were complaining that your kids could learn to build a bomb on the internet and therefore you shouldn't go online. It hasn't stopped terrorists from using the internets to wreak havoc on innocent people.

"People can really work on projects for the good of humanity while learning about something they want to learn about in the process," she said.

There are critics out there who are afraid that someone could unleash a disaster on humanity that may even out-fuck-up what the bush administration has wrought on an unsuspecting world. Most evil scientists are working for world governments though. Hey, you never know, someone may find the cure for cancer or invent an easy test to detect dangerous substances contained in crappy Chinese imports.

We already know that there are terrorists out there planning dangerous activities and there are manufacturers cutting costs and incorporating dangerous chemicals into everyday products. Our own government is fighting to build coal plants or dump toxic waste near pristine national parks. We also know that an asteroid could destroy the earth. There are a lot more things to worry about than the possibility of giant mutant turtles.

Also in science news for all you disappointed star gazers out there is this story, Death Valley works to preserve night sky

Acclaimed for its ink black skies, Death Valley, the hottest place in North America, also ranks among the nation's unspoiled stargazing spots. But the vista in recent years has grown blurry.

The glitzy neon glow from Las Vegas and its burgeoning bedroom communities is stealing stars from the park's eastern fringe. New research reveals light pollution from Vegas increased 61 percent between 2001 and 2007, making it appear brighter than the planet Venus on clear nights as seen from Dante's View

Only once in my adult life have I seen the sky from an unspoiled vantage point and that was in Cherry Springs State Park in Pennsylvania, one of the only 2 parks certified by the International Dark-Sky Association as dark-sky enclaves. It was like a planetarium only better. I can't even describe the wonderment I experienced. I thought about setting up an observatory in my backyard only to discover that light pollution from NYC made it nearly impossible to enjoy all that is out there.

Posted by Liz Blondsense at 7:40 AM