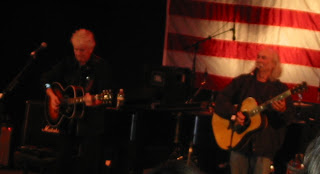 Last evening I attended a pro-Obama rally in the park across the street put on by the unions which featured all our local Democratic politicians, Congresswoman Carolyn McCarthy (gee, Peter King didn't come too) and plenty of music from Nine Days, Bruce Hornsby and others. We got there at 3 only to be subjected to hours of speeches and wondered when the music would come on. It started at 6 and didn't end until 8:30. We were pretty beat by then and thinking of going home early but told ourselves that we spent that much time there, we may as well stay longer.

The best part of the evening was the finale, after most of the weary Obama supporters went home, when David Crosby and Graham Nash came on the stage for the intimate but enthusiastic crowd. The big old harvest moon was rising over the trees just before they came on stage and made for an enchanted evening. Crosby and Nash encouraged us to sing along with Our House and Teach Your Children as well as teaching us another song which we didn't know. I am so glad that I stayed for that and glad that I brought blankets, chairs and refreshments.

Just down the road from the park is Hofstra where the debate was about to happen and we wondered about the traffic getting out of there, which turned out to be fine. What event I was totally unaware of until we were on our way home and what my son sarcastically billed the highlight of October 15, was the opening of a new nightclub just on the other side of the park that featured Lindsay Lohan's girlfriend, Samantha Ronson. look what I missed!

Gosh, my little neck of the woods was really happening last evening.
Posted by Liz Blondsense at 11:15 AM