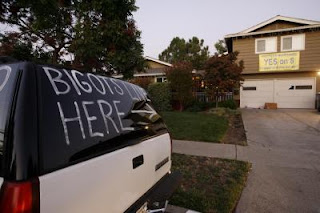 Mom: Rendered speechless, with eyes bugging out of her head as if she’s about to have a flippin’ coronary. Sheer terror sets into the kitchen….

Meanwhile, a Silicon Valley lesbian couple parked their SUV Chevy Suburban displaying a message in front of a “devout Mormon family’s home” with a large “Yes on Prop 8” banner hanging over the expanse of their garage.

The family’s murky “logic” in support of this anti-gay rights proposition goes like this:

"We are not motivated by hate and anger in any way," Michele Sundstrom said. "We think same-sex couples should enjoy the same rights and privileges as married couples, as it says in the California family code. We just don't want to redefine the word marriage."