Wall Street Bailout: Save the Beast and Starve the Unchosen 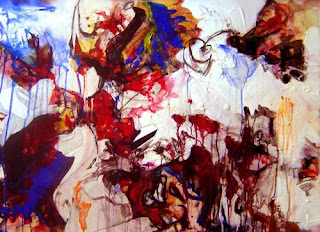 “All sugar for the villains, lasting pain and damage for the victims.”
-William Greider
Are the locusts here yet?

In his article Paulson Bailout Plan a Historic Swindle William Greider speculates that with the Federal Reserve announcement that it's coming to the rescue of American International Group (AIG) to the tune of $85 billion, this may be the last nail in the middle-class coffin to blow the lid off this paralyzed economic corpse of a nation fed up with this WMD of an economic crisis that may finally “bring down one or both political parties, take your choice.”

Former head of Goldman Sachs, high-roller Treasury Secretary Hank Paulson’s scheme to save the beast of Wall Street's wooly-mammoth financial institutions is underway. Invoking Job, Paulson breathlessly insisted yesterday "We need this to be clean and quick." Sure we do, Hank! One slight problem: the collective ROYAL WE whom this is “supposed” to help doesn’t include the rest of us!

No, no, not surprisingly, the ROYAL WE instead includes a whole host of wealthy Congressional and insider beltway Democrats and Republicans, too -- the same ones the rest of us are counting on to “just say no” to this colossal corporate welfare plan of mammoth proportions. But who is “we”? Bundlers for McCain/Obama are Among Wall Street's Tumblers. HA! Hank himself (Goldman Sachs is also under the gun) is of course on the list of the Chosen to be rescued. Among them also include Nancy Pelosi who has a quarter-of-a-million-dollars' worth of AIG stock (pin money, I know) and John Kerry's wife, zillionaire ketchup heiress, Teresa Heinz, has more than $2 million (a whopping sum to many -- but quite frankly, that’ll buy you a fixer along the leafy banks of the polluted Potomac).

Anyway, it comes as no shock or awe that lawmakers owned the most stock in AIG:
“Of all the companies making headlines this week, AIG has been the most nonpartisan in its contributions, splitting evenly the $9.7 million it has contributed over time. Sen. Chris Dodd, chair of the Senate banking committee, has racked up the most from AIG, with a total of $281,400, while Charles Schumer (D-N.Y.), a member of both the Senate Banking, Housing and Urban Affairs Committee and the Senate Finance Committee, takes second with $116,400. Presidential candidates John McCain and Barack Obama collected $103,000 and $82,600 from AIG, respectively.”

Of course, none of this bailout would matter if the same bipartisan House of Representatives and two major corporate presidential candidates weren’t ALSO pledging to sell out our jobs. Real estate prices will once again start rising when people have the incomes necessary to buy houses and refinance. But so far, Hank Paulson hasn’t yet explained how Joe Homeowner is supposed to make enough money (or any) to pay for the mortgages while jobs are shipped out.

William Greider speculates that this bailout may be the spark of angry rebellion from the bottom up, a long overdue “correction”:

“If Wall Street gets away with this, it will represent an historic swindle of the American public--all sugar for the villains, lasting pain and damage for the victims. My advice to Washington politicians: Stop, take a deep breath and examine what you are being told to do by so-called "responsible opinion." If this deal succeeds, I predict it will become a transforming event in American politics--exposing the deep deformities in our democracy and launching a tidal wave of righteous anger and popular rebellion. As I have been saying for several months, this crisis has the potential to bring down one or both political parties, take your choice.”
-2Truthy
Posted by 2Truthy at 7:57 PM