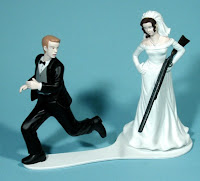 The Timesonline has this headline McCain camp prays for Palin wedding
It appears that John McCain plans to sit in the front row at the rushed wedding of Bristol Palin and Levi Johnston.

“It would be fantastic,” said a McCain insider. “You would have every TV camera there. The entire country would be watching. It would shut down the race for a week.”

Shutting down the race as a campaign strategy? Wow. Desperate times call for desperate measures.

Yes, everyone in the world would be glued to their television to witness this glorious occasion... and make fun of it. Poor kids. After all these star crossed young lovers would one day have gotten married and raised a family together, right? Oh wait...

The ice-hockey player wrote on his MySpace page he was a “f****** redneck” and stated, “I don’t want kids.” But a McCain insider predicted he would marry Bristol whenever his future mother-in-law wanted. “It’s a shotgun wedding. She kills things,” the source joked.

Ok. Nevermind. But it's still a typical American wedding where the girl finds out she's pregnant and the boy marries her. Love has nothing to do with it. This is nothing new. Nothing to write home about. Isn't this how "values" voters usually get married anyway? I know it's a great Catholic tradition. Yes, we need a constitutional amendment to protect this.
Posted by Liz Blondsense at 9:23 AM