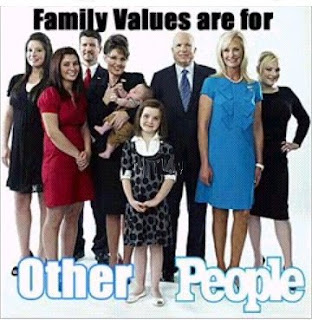 The Poor are OK, but God is down with the Rich

Ever wonder where all that “Axis of Evil” and “Evil doer” crap came out of the blue from that was used to attack a country that most people here never even knew existed? You don’t think famed born-againer Dubya cooked that up all by himself? Or the inclusion of the deity “God” on our currency as in “In God we Trust”? Whether a candidate belongs to any particular religion or not, it is guaranteed that during election season, we are treated to the bipartisan religious manipulations and hypocrisies of candidates in their shameless attempts to win over “values voters.”

Just as Iran is a country populated with many intelligent, educated people who want nothing whatsoever to do with the control and oppression of their country by fundamentalist Muslim Imams who set the moral and political tone for its citizens, America too, is controlled by an elite (Christian) fundamentalist group at the highest levels in Washington. In his book The Family: The Secret Fundamentalism at the Heart of American Power, author Jeff Sharlet reveals an influential, secretive group known as “The Family, aka The Fellowship” which has “exerted its influence in an impressive and frightening array of mostly dire events.”

The Family's members have included a vast array of politicians including congressmen and senators, some which chair prestigious committees, Supreme Court justices, CEOs of leading corporations, military senior officers, heads of foreign countries, and at least one president of the United States, Jimmy Carter. The Family hosts an annual event known as the National Prayer Breakfast where they put on a Ward and June Cleaver face to their constituents. But in reality, this group’s once yearly emergence would be more akin to Darth Vader dressed up as Mary Poppins passing out candy and good will sprinkled with just a spoonful of sugar and dash of church lady piety. The Family’s elitist, first charter is to horde money and resources via the halls of government and to keep them out of reach for the majority of the people they so despise. So who exactly comprises the Family? Doug Coe, one time “special advisor” to President Jimmy Carter, led the group which has operated quietly in the halls of power, free of democratic accountability. Sharlet explains their not-so-humble beginnings and growth, tracing a greedy, mean spirited disdain for the non-wealthy, mixed with a supreme desire to horde money and resources and wield power at the expense of the public good:

“What is known as the Family began with a clergyman named Abraham Vereide in Depression-era Seattle. Vereide, or Abram, as he is referred to by the Family, looked upon workers who went on strike to secure enough pay to feed their families as agents of Satan. He was convinced that the Kingdom of God would be secured if the best among us, the rich that is, guided by Jesus Christ, made decisions for the rest of us unfettered by such messy things as democracy and the rule of law. If the poor could be made to see that God intended them to be poor and humbly accept their lot all would be well.
Abram, as one might have guessed, regarded the New Deal as an abomination in the eyes of the Lord. Abram was a very effective salesman for this idea among wealthy businessmen in Seattle. The Family grew through members recruiting new members who were either wealthy or in positions of authority. Over time, the Family's theology has been stripped down to "Jesus plus nothing." Members are expected to have surrendered themselves to Jesus Christ, but are certainly not asked to perform such unseemly acts as giving what they have to the poor or turning the other cheek. A prospective member gets reassurance that he (there are women involved, but with a few notable exceptions they have about as much power as the members of a ladies' auxiliary at a Moose lodge) has got Jesus watching over him, has his sins forgiven, and is now serving Jesus in everything he does. He gets to keep his power, his wealth, and his vices. He is even able to tell himself that he is humble, or at least as humble as a man can be who reminds himself every day that he is one of God's elect.”

The Family makes fraternity and sorority pledges look like a bunch of retarded pantywaists. This group has its collective finger on the banking system, the military, the bomb, civil rights and our personal and reproductive freedoms. Whereas most people think about Religious Right fundamentalism in terms of "Joe Plebian Public" in church every Sunday, this book reveals the invisible, extremely powerful, exclusive and greedy forces operating in the name of “God and Family” behind the increasing anti-people laws and oppression that this country is experiencing as our economy tanks and our civil rights and freedoms disappear. Over the past one hundred years, history has shown how we got to this creepy place where candidates are forced to invoke God and either defend or damn pastors in order to secure the secret handshake of this country’s fundamentalist, secret Mafia which runs our government.

But at the end of the day, the national political apparatus is a wholly owned subsidiary of Global Corporation, Inc. which is co-opted by all ruling elites of the world's religions which dictate “In Gre$d We Trust.”