Dozens recount Republican convention (protest) experiences -One officer said...... "Your God is not with you right now. We are all devils" 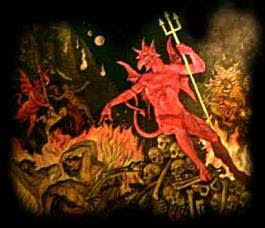 The above photo appears on a website called Sharp Iron which discusses religion, spirituality, and life. I thought this post Shoot the Messengers (Why Fire and Brimstone Preaching is Evil) was appropriate for what is happening in our world today.

Today the stick is still used more often than the carrot. Sure Joel Osteen and friends preach the Gospel of prosperity, but they are only using reverse psychology. If you don’t do things their way you will not only miss out on prosperity but you will very likely remain mired in the trap of poverty. Even some elements of the liberal wing of the Church have found success in using scare tactics to meet their agenda......

So now, remember where the word PROTEST originates --

Protestant: The second Dict of Spires, in 1529, decided that the religious differences could only be decided by an ecclesiastical council, thus disallowing the right of private judgment. A solemn protest was made against this decision by the Lutheran princes of Germany, April 19, 1529, in consequence of which the members of the Reformed Churches have since been known as Protestants. The protest was drawn up by Luther and Melanchthon.

I find it amusing that humans have to get together to decide what "G_D" wants.


Usually any kind of protest in this country (or it's aftermath) barely gets a blip on the radar screen.....but it's quickly becoming headlines again this morning (online that is).

Last night in St. Paul, Minnesota dozens of folks gathered to share experiences they had during the Republican National Convention. More than 800 people were arrested during the convention Sept. 1-4. Officers in riot gear used tear gas, pepper spray and percussion grenades to control protesters. Some observers have questioned the use of force and criticized police for arresting journalists and legal observers.


My guess is that if this story hits the major news stations and publications today, it will only serve to shut up those of us who may be considering a protest of this economic bailout.
Posted by JerseyCynic at 4:29 AM