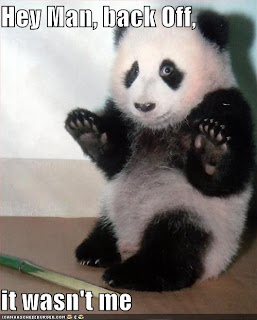 I had nothing to do with it.

You see, many years ago I started getting blamed for a lot of stuff at work and in my private life, so as a defense mechanism of sorts I started to agree with the detractors.

The way I did it was to say that I was, in fact, An Evildoer.

A member of a Family of Evildoers, who have left their mark on history by sowing destruction everywhere.

The ancestor who assured Napoleon at Waterloo that the Prussians weren't coming to Wellington's aid;

The great-uncle who blew up the Hindenburg (he shouldn't have been deer hunting that day);

The great-grandfather who sank the Titanic (and do you have any idea how hard it was to put a diesel engine on an iceberg?);

And I, of course, who was responsible for the Challenger disaster.

One of my coworkers went so far as to (half-jokingly) insinuate that I had something to do with 9/11.

I assured her that I did not.

So, when the Flying Fickle Finger of Fate starts casting about to see who's responsible for Bear Stearns, the Housing Crisis, the Credit Crisis, the fall of Fannie and Freddie, the demise of Lehman Brothers and the sale of Merrill Lynch, just bear in mind: